In Oliver Stone's JFK, mystery man "X" (portrayed by Donald Sutherland and based largely on L. Fletcher Prouty) theorizes to New Orleans District Attorney Jim Garrison (Kevin Costner) about the possible identity of one of the conspirators who plotted against John F. Kennedy.

It all begins with a phone call, X says:

In a Pentagon office, a man in civilian clothing is on the phone, his back to the screen. This is Mr. Y, X's superior officer. Shadows pervade the room. An unshuttered window overlooks the Potomac River and the White House.

X (VOICE OVER)
. . . maybe to somebody like my superior who's been running the "Mongoose" program out of Florida and who has no love for Kennedy.
VOICE ON PHONE
Bill [sic], we're going. We need your help. . . .
Y (into phone)
When?
VOICE ON PHONE
In the fall. Probably in the south. We want you to come up with a plan . . .
X (V. O.)
He's done it before. Other countries. Lumumba in the Congo, Trujillo, the Dominican Republic, he's working on Castro. No big deal.(1)

Who is "General Y"? According to the screenplay, "The status of Y is only clear by the sign on the desk, the name blocked by a passing figure."(2) Here's that sign: 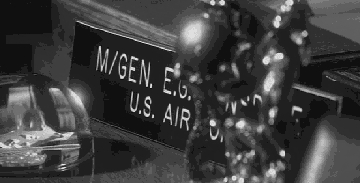 X
In November '63, one week after the murder of Vietnamese President Diem in Saigon, and two weeks before the assassination of our President . . . I was sent by my superior officer, call him Y, to the South Pole as the military escort for a group of international VIP's. This trip had nothing to do with my nine years of work in Special Operations. It was sort of a "paid vacation."

. . . Anyway, after I came back I asked myself why was I, the chief of special ops, selected to travel to the South Pole at that time to do a job that any number of others could have done? One of my routine duties if I had been in Washington would've been to arrange for additional security in Texas. The Secret Service is relatively small, and by custom the military will augment them. I checked it out when I got back and sure enough, I found out someone had told the 112th Military Intelligence Group at 4th Army Headquarters at Fort Sam Houston to "stand down" that day, over the protests of the unit Commander, a Colonel Reich . . .(3)

This makes for a dramatic episode in Stone's movie, but it is pure fiction. X's real-life inspiration, US Air Force Lt. Col. L. Fletcher Prouty, was not the "chief of special ops"; he had no responsibilities related to the Secret Service or presidential protection; the 112th received no order to "stand down" -- in fact, the unit did provide support for the Secret Service that day in Dallas; and L. Fletcher Prouty received no sinister assignment from Edward Lansdale at that time: in fact, Lansdale had retired by the start of November 1963.

In other words, each of X's claims is invented to lend credibility to his tale, which otherwise would be exposed as groundless speculation.

Prouty and Stone do have one more bit of evidence to link Lansdale to the assassination. Unfortunately, it's so ludicrous that one can easily understand why Stone chose to omit it from JFK's theatrical release.

General Y "was there that day in Dealey Plaza," X tells Garrison. "You know how I know?" "That picture of yours. The hoboes . . . you never looked deep enough . . ."

FLASHBACK TO: one of the hobo pictures. Next to the freight entrance of the Book Depository, Y, in a dark suit, is nonchalantly walking past the hoboes, his back to us. The camera closes in on Y.

X (VOICE OVER)
I knew the man 20 years. That's him. The way he walked . . . arms at his side, military, the stoop, the haircut, the twisted left hand, the large class ring. What was he doing there? If anyone had asked him, he'd probably say "protection" but I'll tell you I think he was giving some kind of "okay" signal to those hoboes -- they're about to get booked and he's telling 'em it's gonna be okay, they're covered. And in fact they were -- you never heard of them again.

Yes, L. Fletcher Prouty claims that Maj. Gen. Edward Lansdale, USAF (Ret.) is the man seen from the back in the photograph below, taken in Dealey Plaza. 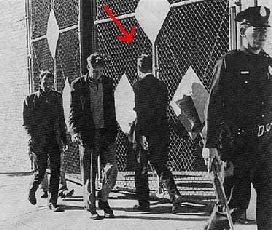 Of course, the hoboes have been identified, and they were indeed hoboes, not assassins; but that never stopped Prouty from spinning his yarns, which he continued to do until his death in 2001.

Here is what Lansdale himself had to say about L. Fletcher Prouty, from Cecil B. Currey's Lansdale biography, The Unquiet American:

I continue to be surprised to find Fletcher Prouty quoted as an authority. He was my "cross to bear" before Dan Ellsberg came along. Fletch is the one who blandly told the London Times that I'd invented the Huk Rebellion, hired a few actors in Manila, bussed them out to Pampanga, and staged the whole thing as press agentry to get RM [Magsaysay] elected. He was a good pilot of prop-driven aircraft, but had such a heavy dose of paranoia about CIA when he was on my staff that I kicked him back to the Air Force. He was one of those who thought I was secretly running the Agency from the Pentagon, despite all the proof otherwise.

Perhaps one day Oliver Stone or another Prouty disciple will put forward some evidence for Edward Lansdale's involvement in the JFK assassination. Until then, one can understand why Stone prefers not to come out and name Lansdale in his film as a conspirator.
Copyright © 2001 by David Reitzes

1. Oliver Stone and Zachary Sklar, JFK: The Book of the Film (New York: Applause, 1992), pp. 181-82. All quotations are from the shooting script and may vary slightly from the finished motion picture.

3. Oliver Stone and Zachary Sklar, JFK: The Book of the Film (New York: Applause, 1992), pp. 107-08. All quotations are from the shooting script and may vary slightly from the finished motion picture.