Was there a "Clay Bertrand"?
Dave Reitzes

It's well known that neither the FBI nor Secret Service could locate any trace of a "Clay Bertrand" in New Orleans in 1963-64. Not so well known is the fact that Jim Garrison and his no staff were every bit as unsuccessful during their later JFK investigation.

Jim Garrison and his followers have long claimed that it's an open secret in New Orleans that "Clay Bertrand" was actually businessman Clay Shaw. But in 1967, NODA staffers told a different story. Just four days before Clay Shaw's arrest (at which time Jim Garrison formally alleged Shaw to be "Bertrand"), one of Garrison's top investigators, Lou Ivon, filed a memorandum indicating that he could find no trace of a "Clay Bertrand" in New Orleans. Furthermore, he said, Dean Andrews had confided to an associate that "Bertrand" didn't exist -- that he'd made the story up. Andrews told Garrison himself the same thing, as Garrison confided to journalist Richard Billings. (Richard Billings, investigative notes, February 23, 1967 [p. 13].) 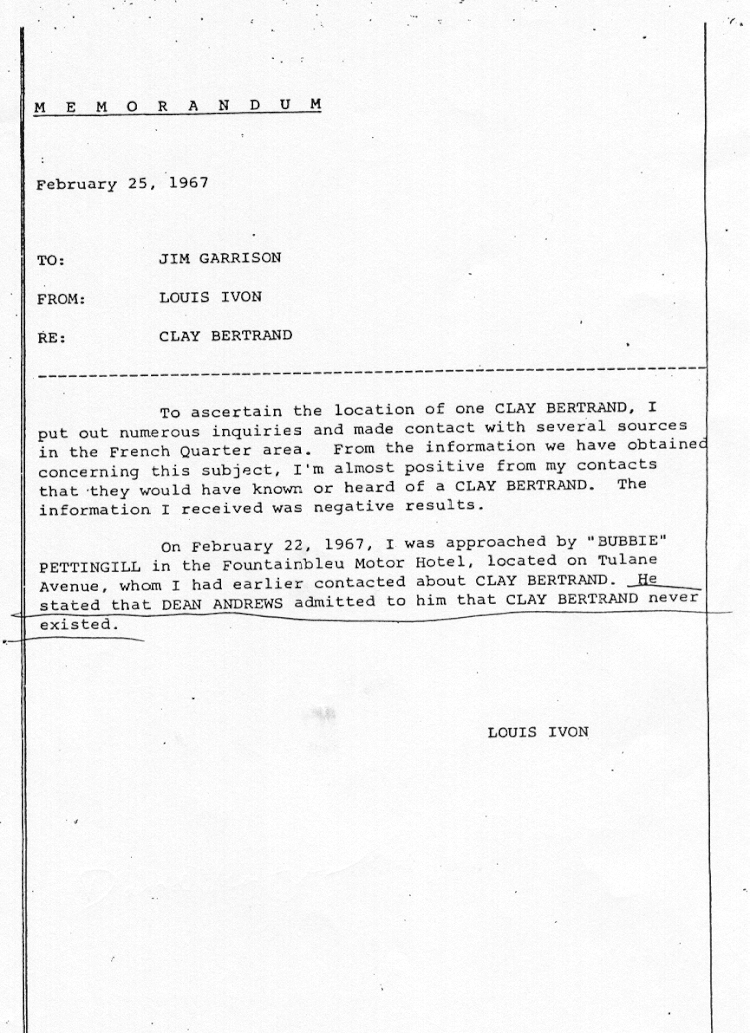 To ascertain the location of one CLAY BERTRAND, I put out numerous inquiries and made contact with several sources in the French Quarter area. From the information we have obtained concerning this subject, I'm almost positive from my contacts that they would have known or heard of a CLAY BERTRAND. The information I received was negative results.

On February 22, 1967, I was approached by "BUBBIE" PETTINGILL in the Fountainbleu Motor Hotel, located on Tulane Avenue, whom I had earlier contacted about CLAY BERTRAND. He stated that DEAN ANDREWS admitted to him that CLAY BERTRAND never existed.

Key NODA investigator Andrew Sciambra told the exact same thing to journalist Edward Jay Epstein: that he could find no trace of a "Clay Bertrand" in New Orleans. (Edward Jay Epstein, The Assassination Chronicles (New York: Carroll and Graf, 1992), p. 196.) Dean Andrews confirmed to Epstein that he had used the fictitious "Bertrand" name as a cover for a friend of his, the owner of a gay bar in the French Quarter. (Ibid., p. 196 fn.) This was Gene Davis.

Even one of Garrison's most ardent supporters and personal friends, Mark Lane, says, "I never saw credible evidence which convinced me that [Clay Shaw] had ever used the ["Bertrand"] alias." Lane blasted Oliver Stone for implying otherwise.

Back to Who's Who in the Jim Garrison Case