"You Don't Have a Choice Anymore" 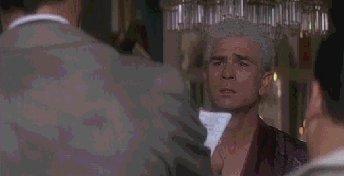 X
Keep digging. Y'know you're the only person to ever bring a trial in the murder of John Kennedy. That's important -- it's historic.
JIM
I haven't yet. I don't have much of a case.
X (rising to leave)
But you don't have a choice anymore. You've become a significant threat to the national security structure. They would've killed you already, but you got a lot of light on you. Instead, they're gonna destroy your credibility; they already have in many circles in this town. You're some kinda ego-crazed southern caricature to many folks. Be honest -- the best chance you got is come up with a case, something, anything, make arrests, stir the s***storm. You gotta hope to reach a point of critical mass where other people will come forward and the government will crack. Remember, fundamentally people are suckers for the truth, and the truth is on your side, 'bubba. I hope you get a break . . .

Jim watches this mystery man walking away. The figure vanishes in the Washington breeze. Flags flap over some distant memorial to some distant history of the Republic. Jim rises, a decision made. EXTERIOR OF CLAY SHAW'S HOUSE - NEW ORLEANS (1967)

Jim, Lou [Ivon], Al [Oser], Numa [Bertel] and several policemen stand at the door as Clay Shaw comes to it.

LOU
Mr. Shaw, you're under arrest, charged with conspiracy and entering into an agreement with other persons for the specific purpose of committing the crime of murder of President John F. Kennedy in violation of . . .

This scene is based upon several events and sources; to say Stone is fictionalizing things is perhaps an understatement, even by Oliver Stone's usual standards.

Obviously, the scene serves to explain why Jim Garrison decided to arrest Clay Shaw on evidence that was so flimsy, a jury dismissed it in a mere fifty-four minutes.

The fateful meeting with the mystery man, X, is based primarily upon Garrison's encounters with two individuals: L. Fletcher Prouty and Richard Case Nagell. But neither Nagell nor Prouty played any role whatsoever in the Clay Shaw trial; the DA did not meet Nagell until more than year after Shaw's arrest, and did not ask Nagell to testify; and Garrison did not meet Prouty at all until long after the trial was over.

Without a mystery informant urging the DA on, however, Oliver Stone would have no way of explaining why Jim Garrison decided to arrest Clay Shaw on nothing but the eminently impeachable story of witness Perry Raymond Russo, upon whom Stone's "Willie O'Keefe" character is largely based.

Garrison's act would have stood starkly exposed as the groundless, arbitrary move it was.

1. Oliver Stone and Zachary Sklar, JFK: The Book of the Film (New York: Applause, 1992), pp. 113-14. All quotations are from the shooting script and may vary slightly from the finished motion picture.