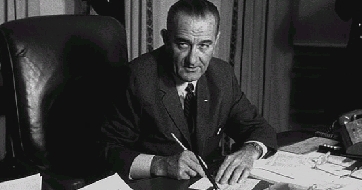 In Oliver Stone's JFK, mystery man "X" (portrayed by Donald Sutherland and based largely on L. Fletcher Prouty) claims to New Orleans District Attorney Jim Garrison (Kevin Costner) that President Lyndon B. Johnson reversed the Vietnam policies of his predecessor, and did so mere days after the assassination:

X (VOICE OVER)
Only four days after JFK was shot, Lyndon Johnson signed National Security Memo 273, which essentially reversed Kennedy's new withdrawal policy and gave the green light to the covert operations against North Vietnam that provoked the Gulf of Tonkin incident. In that document lay the Vietnam War. . . .(1)

I keep thinking of that day, Tuesday the 26th, the day after they buried Kennedy, LBJ was signing the memorandum on Vietnam with Ambassador Lodge.

FLASHBACK TO: the White House, 1963. Johnson sits across the shadowed room with Lodge and others. His Texas drawl rises and falls. He signs something unseen.

JOHNSON
Gentlemen, I want you to know I'm not going to let Vietnam go the way China did. I'm personally committed. I'm not going to take one soldier out of there 'til they know we mean business in Asia . . .

National Security Action Memorandum 273 was drafted on November 21, 1963, while JFK was still alive; he was expected to approve it upon his return to the White House from Texas. With slight modifications, it was approved by LBJ on November 26. The second paragraph reads:

The objectives of the United States with respect to the withdrawal of US military personnel remain as stated in the White House statement of October 2, 1963.

What about LBJ's statement, "I'll give you your damned war"?

Johnson subscribed to the adage that "wars are too serious to be entrusted to generals." He knew, as he once put it, that armed forces "need battles and bombs and bullets in order to be heroic," and that they would drag him into a military conflict if they could. But he also knew that Pentagon lobbyists, among the best in the business, could persuade conservatives in Congress to sabotage his social legislation unless he satisifed their demands. As he girded himself for the 1964 presidential campaign, he was especially sensitive to the jingoists who might brand him "soft on Communism" were he to back away from the challenge in Vietnam. So, politician that he was, he assuaged the brass and the braid with promises he may never have intended to keep. At a White House reception on Christmas Eve 1963, for example, he told the joint chiefs of staff: "Just let me get elected, and then you can have your war."(3)

Thanks to newly declassified audio recordings from the Johnson White House, we can hear what the President was saying privately about the conflict in Vietnam. One example is a conversation from May 27, 1964 -- six months after JFK's assassination -- with Senator Richard Russell:

JOHNSON. What do you think of this Vietnam thing?

RUSSELL. It's the damn worst mess I ever saw, and I don't like to brag. I never have been right many times in my life. But I knew that we were going to get into this sort of mess when we went in there.

JOHNSON. That's the way that I've been feeling for six months.

RUSSELL. If I was going to get out, I'd get the same crowd that got rid of old Diem to get rid of these people and get some fellow in there that said he wished to hell we would get out. That would give us a good excuse for getting out. . . .

JOHNSON. How important is [Vietnam] to us?

RUSSELL. It isn't important a damn bit, with all these new missile systems. . . .

JOHNSON. I've got a little old sergeant that works for me over at the house, and he's got six children, and I just put him up there as the United States Army, Air Force and Navy every time I think about making this decision, and think about sending that father of those six kids in there. And what the hell are we going to get out of his doing it? And it just makes the chills run up my back.

RUSSELL. It does me. I just can't see it.

Later that day Johnson told national security adviser McGeorge Bundy, "I don't think it's worth fighting for, and I don't think that we can get out. It just the biggest damn mess I ever saw." "It's damned easy to get in a war," he added, "but it's gonna be awfully hard to extricate yourself if you get in."

Are these the words of a warmonger, or do they reflect the same precise issues with which John F. Kennedy also wrestled prior to his tragic death?

Does it make sense for Oliver Stone to be portraying JFK as a hero and LBJ as a villain?

1. Oliver Stone and Zachary Sklar, JFK: The Book of the Film (New York: Applause, 1992), p. 112. All quotations are from the shooting script and may vary slightly from the finished motion picture.

2. Oliver Stone and Zachary Sklar, JFK: The Book of the Film (New York: Applause, 1992), pp. 183-84. All quotations are from the shooting script and may vary slightly from the finished motion picture.