Let's examine Stone's points one by one.

Later Jim and Lou stand on the south side of Elm Street in Dealey Plaza talking to Jean Hill, an attractive, 30-ish teacher. Her demeanor has a rock-solid Texas back-country conviction to it; she's a woman not easily frightened.

JEAN HILL
I was standing here next to my friend Mary Moorman, who took the photograph when he was killed . . .

I jumped out in the street and yelled, "Hey Mr. President, look over here, we wanna take your picture." He looked up and then shots rang out. Mary fell to the ground right away, shouting, "Get down, they're shooting, get down, they're shooting." I knew it but I was moving to get closer to him. The driver had stopped -- I don't know what was wrong with that driver. And then, out of the corner of my eye, I saw this flash of light, in the bushes and that last shot . . . just ripped his head off, I mean, blood, brains, just blew everything . . . I looked up and saw smoke from the Knoll.(1)

Powerful stuff, and there is no doubt that Jean Hill told Oliver Stone that all this had occurred.

In fact, in a filmed television interview with NBC affiliate WBAP, conducted shortly after the assassination, Hill was asked if she saw anyone fire at the President, and she responded, "No . . . I didn't see any person fire the weapon." "You only heard it," the reporter prompted. "I only heard it," she affirmed.

It was only in 1978 that Jean Hill first began claiming she had seen someone fire from the knoll. 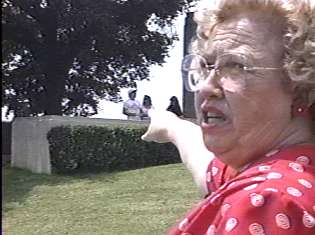 JEAN HILL
And everything was frozen -- seemed like people wasn't even breathing, like you're looking at a picture -- except this one guy. I saw this one guy running from the Book Depository towards the railroad tracks. And that was the same man I saw on TV two days later shooting Oswald. That was Jack Ruby. No question about it.(2)

But Jack Ruby was not in Dealey Plaza at the time of the assassination; he was observed by a number of people in the offices of the Dallas Morning News, where he was preparing an advertisement for the Carousel Club, immediately before and after the shooting.(3)

JEAN HILL (V.O.) (CONT'D)
It was him I was chasing up the Grassy Knoll, thinking our guys had shot back and maybe we got one of them. I don't know what I would have done if I had caught him, but I knew something terrible had happened and somebody had to do something. . . .

I never did catch him. All I saw in that parking area were railroad workers and Dallas's finest.(4)

But Jean Hill didn't chase anyone up the knoll; numerous photographs depict her kneeling on the ground next to her friend, Mary Moorman, for some time after the shooting had ended. As author Richard Trask describes it in Pictures of the Pain, his study of the photographic evidence, "Hill does not rush across Elm Street . . . for some time following the shooting, and then not until just about everyone in the area is back on their feet and numerous other spectators have arrived . . ."(5)

Two Secret Service types approach her suddenly, and one of them puts an arm on her shoulder.

FIRST AGENT
Secret Service, ma'am. You're coming with us.
JEAN HILL
Oh no, I'm not. I don't know you. We gotta catch this shooter -- don't you realize?
SECOND AGENT (grabbing her other shoulder)
I said you're coming with us. I want the pictures in your pocket.
JEAN HILL (V.O.)
. . . he put a hurt on me but good.
JEAN HILL (CONT'D)
I don't have any pictures! I have to go back and find my friend Mary. Lemme alone!

The two agents hustle her away.

Hill, 32 years old that day, is shown into a third floor office of the County Courts Building -- which has a view of the assassination area. Other Secret Service agents are there. Some 18 people are detained there.

JEAN HILL (V.O.)
These new people never identified themselves. They musta been watching the whole thing 'cause they knew everything Mary and me had been doing that day. I guess I wasn't too hard to find -- wearing that red raincoat.
MAN
How many shots you say you heard?
JEAN HILL
Four to six.
MAN
That's impossible. You heard echoes . . . echoes. We have three bullets and three shots which came from the Book Depository and that's all we're willing to say.
JEAN HILL (V.O.)
. . . which is strange 'cause this is less than 20 minutes after the assassination.
JEAN HILL (CONT'D)
No, I saw a guy shooting from over there. He was behind that fence. What are you going to do about it?
MAN
We have that taken care of. You only heard three shots and you are not to talk to anyone about this. No one, you hear?(6)

By the time Oliver Stone talked to Hill, this version of her story was quite vivid in her mind; but when deposed by the Warren Commission in 1964, she had a very different recollection of who had brought her into the Criminal Courts Building.

Mr. Featherstone [sic] of the Times Herald had gotten to Mary and ask [sic] her for her picture she had taken of the President, and he brought us to the pressroom down at the Sheriff's office.

"Mr. Featherstone of the Times Herald" was actually Jim Featherston; it was he, not a Secret Service agent, who brought Jean Hill and Mary Moorman to the press room located inside the Criminal Courts Building.

Featherston had watched the motorcade from the east side of Houston Street. When the shots rang out, he thought they were firecrackers, and was unable to see any of the events occurring on Elm Street. He spotted an acquaintance of his, Frank Wright, and asked him what had happened. Wright said, "I don't know, but a young woman down there has taken a picture of whatever happened." Featherston picks up the story here:

Why Mrs. Hill said all this has never been clear to me -- I later theorized she got swept up in the excitement of having the cameras and lights on her and microphones shoved into her face. She was suffering from a sort of star-is-born syndrome, I later figured.(7)

Of course, by the time she spoke with Oliver Stone, Jean Hill's story had grown even wilder.
Article continues below.

Stone goes on to detail Hill's claims that Warren Commission counsel Arlen Specter bullied her and tried to get her to change her testimony. The curious can read her complete Warren Commission deposition and decide for themselves whether it bears out Hill's claims, and whether it appears altered in any way. (As conspiracy-oriented researcher Ulric Shannon observes, "why would the Warren Commission alter Jean Hill's testimony . . . but leave in her description of four to six shots, some from the knoll? And why does her 'altered' testimony match point for point her description of the assassination to radio reporters some twenty minutes after the shooting?" "Well, maybe that tape has been doctored, too," he adds.)

JIM
Are you willing to testify, Mrs. Hill?
JEAN HILL (without hesitation)
. . . Damned right I would. Somebody's got to tell the truth around here 'cause the Government sure ain't doing it.

The real Jean Hill declined to testify at the trial of Clay Shaw.

1. Oliver Stone and Zachary Sklar, JFK: The Book of the Film (New York: Applause, 1992), pp. 122-23. All quotations are from the shooting script and may vary slightly from the finished motion picture.

2. Oliver Stone and Zachary Sklar, JFK: The Book of the Film (New York: Applause, 1992), p. 123. All quotations are from the shooting script and may vary slightly from the finished motion picture.

4. Oliver Stone and Zachary Sklar, JFK: The Book of the Film (New York: Applause, 1992), p. 123. All quotations are from the shooting script and may vary slightly from the finished motion picture.

6. Oliver Stone and Zachary Sklar, JFK: The Book of the Film (New York: Applause, 1992), pp. 123-24. All quotations are from the shooting script and may vary slightly from the finished motion picture.