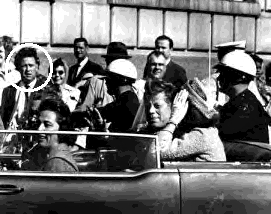 Jean Hill was deposed by Commission counsel Arlen Specter in Dallas on March 24, 1964.(1) Hill's friend Mary Moorman had just snapped a Polaroid photograph of the President's assassination, and Hill testified, "There was a man holding Mary's arm and she was crying and he had hold of her camera trying to take it with him."

"Who was that?" Specter asked her.

Mrs. HILL. Featherstone of the Times Herald and --

Mrs. HILL. That's right. . . . [He was] holding her by the arm and her camera. and telling her she had to go with him, I started trying to shake his hand loose and grab the camera and telling him that "No, we couldn't go, we had to leave." . . . I was just wanting to get out of there and to get away and he kept telling me -- he insisted we go with him and . . . he just practically ran us up to the court house, I guess it is, and put us in this little room . . . we couldn't leave. He kept standing in front of the door and he would let a cameraman in or someone to interview us and they were shooting things in our faces, and he wouldn't let us out.(2) 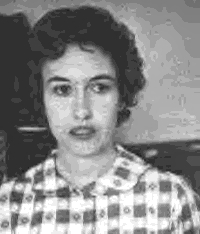 Not only did "Featherstone" hold Hill and Moorman captive in the courthouse, but according to Jean Hill, he also tried to keep her from saying certain things to the press -- particularly her account of a man running up the steps on the grassy knoll after the shots were fired.

Mrs. HILL. ["Featherstone"] said, "You know you were wrong about seeing a man running." He said, "You didn't."

Mr. SPECTER. Who said, "Don't say that any more on the air?"

Mrs. HILL. Featherstone . . . [He said] that the shots had come from a window up in the Depository and for me not to say that any more, that I was wrong about it, and I said "Very well," and so I just didn't say any more that I ran across the street to see the man . . .(3)

Oliver Stone ran with this story in his film JFK, portraying "Featherstone" as a sinister conspirator attempting to intimidate a key eyewitness. Is this what really happened?

Dallas Times Herald reporter Jim Featherston had watched the motorcade from the east side of Houston Street. When the shots rang out, he thought they were firecrackers, and was unable to see any of the events occurring on Elm Street. He saw an acquaintance of his, Frank Wright, and asked him what had happened. Wright said, "I don't know, but a young woman down there has taken a picture of whatever happened." Featherston picks up the story here.

Why Mrs. Hill said all this has never been clear to me -- I later theorized she got swept up in the excitement of having the cameras and lights on her and microphones shoved into her face. She was suffering from a sort of star-is-born syndrome, I later figured.(4)

Had the Warren Commission been interested only in squelching dissent, it would have been wise to call Jim Featherston to testify, or not to depose Jean Hill at all. Instead, for whatever reason, Hill's testimony went unchallenged.

1. Ms. Hill's complete Warren Commission testimony can be read here. More information on Hill can be found in this article at the Kennedy Assassination Home Page and in this article by conspiracy theorist Peter Whitmey.