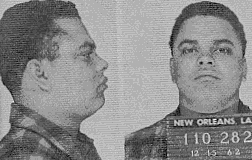 Several days into Clay Shaw's March 1967 preliminary hearing, Vernon William Bundy, a convicted felon and longtime heroin addict residing in parish prison, came forward with a story about having witnessed a public meeting between Clay Shaw and Lee Oswald in 1963.

Jim Garrison denied that the witness had received any special treatment from the DA's office in exchange for his testimony. Garrison claimed that Bundy's background was of no importance. Bundy, claimed Garrison, was in prison voluntarily, having turned himself in for narcotics treatment on March 4, 1967.(1) Bundy stated the exact same thing, under oath, at Shaw's hearing.

Vernon Bundy did not turn himself in voluntarily on March 4, 1967. Vernon Bundy was arrested on March 4, 1967, by the New Orleans Police Department, and charged with violating parole. (Bundy had pleaded guilty to theft charges on May 25, 1966, and had been placed on probation for five years.)(2) Bundy's probation was revoked and he was sentenced to a year in prison, a sentence that ended suddenly following his appearance at the Shaw preliminary hearing.

Bundy was arrested again on January 8, 1968, for armed robbery. His rap sheet states that the New Orleans District Attorney declined to file charges.

In March, Garrison had assigned James Kruebbe to administer a polygraph examination to Bundy. Kruebbe's analysis was that Bundy was lying. NOPD polygraph operator Edward O'Donnell, was present when Kruebbe reported this to Garrison and Assistant DA Charles Ward. Ward assured Kruebbe that Bundy would not be used as a witness, but Garrison overruled him.(4)

In 1971, Jim Garrison was asked under oath by Judge Herbert Christenberry if he had said this. Garrison refused to answer.(6)

In his famous 1967 Playboy interview, Jim Garrison denied that either Vernon Bundy or star witness Perry Raymond Russo had failed a polygraph test. Garrison even denied under oath that Russo had failed such a test, when actually, he had failed two.