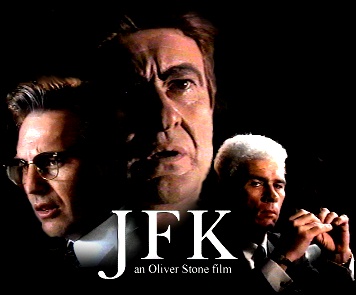 Perry Raymond Russo became Jim Garrison's star witness when he claimed to have overheard an assassination conspiracy involving some of Garrison's personal suspects. Despite problems with his testimony, Russo was the primary inspiration for JFK's fictional "Willie O'Keefe" character, played by Kevin Bacon.

Russo himself also has a bit part in the movie. As he would later explain:

I'm in [JFK] in the beginning. At the bar . . . They didn't give any script. Stone just said, 'Say what you feel.' Anyway, they had Kevin Costner saying, 'Come on, Jack, you can do it' -- you know, pulling for Jack Kennedy to pull through his trauma and his head injuries. It had just been announced over the TV that a priest had been called in which would indicate it had been a very serious wound. He was called in to perform the last rites . . . So Kevin has to stand up and this has about thirty takes. Oliver Stone is in the next room looking at a TV, you know, cause that's how they do it now. I didn't know that; I thought they stood right there but they don't. He's in the next room, looking at TV seeing what it looked like; and so Kevin Costner gets up and says, 'Come on, Jack, you can do it. Come on Jack, you can do it.' So I am watching him and I yell out, 'Sit down, a******, I didn't vote for you.' 'Cut.' Oliver Stone comes running in. He comes face to face, an inch away, and in a very quiet voice he says, 'Don't yell at Kevin.' That was the $7,000,000 man. So I said, 'Sure, I won't yell at Kevin.' Kevin Costner was a very nice person but I don't know where they get this cornpone accent they put on, but then that's the movie game.(1)

[The movie] was done true to that period of time in New Orleans. Yes. And it offers a possible explanation as to what went on in Dallas. With the much available .. the many bits of evidence that's come to light since the assassination and since the publication in August of '64 of the Warren Report there is so much evidence that has come out since. Stone played it much truer to the facts than the Warren Commission speculated.

2. Will Robinson and Marilyn Colman, "The Last Testament of Perry Raymond Russo."